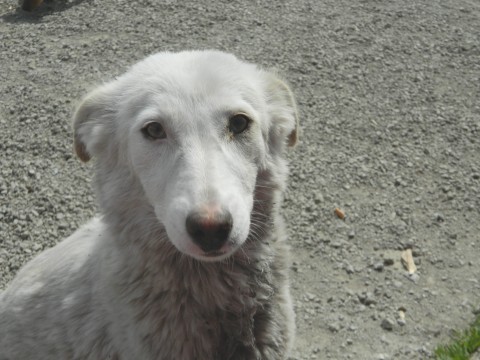 Light looks like a veteran, but did not survive military warfare––just the kind of “war” a street dog struggles through day by day, scrounging for food,  sleeping in holes,  and trying not to be run over by vehicles,  kicked,  stoned,  or hit by a bucket of scalding hot water while hanging around a back door hoping to be thrown some edible scraps.

Light fought to remain alive,  and survived despite becoming a wounded veteran whose injuries made staying alive even more difficult.

Light arrived at the ROLDA shelter just a few days ago, in a van filled with dogs of all different colors and ages.  All were collected from the Galati industrial park, where they were abandoned by people who wanted to get rid of them at some point, or were born,  abandoned by an indifferent society,  or wandered in from the busier parts of the city,  looking for somewhere safer to exist.

Some dogs placed in our kennels, after a lifetime of freedom, become agitated,  not realizing that no further harm will come to them.   Others are curious to meet their new neighbors,  some of whom may be old friends from the streets.  Light, however,  was calm.  She searched for a corner to sleep in,  lay down,  and fell into the most profound sleep I ever saw a dog sleeping!

I opened the kennel door,  and climbed inside with her.   She did not react.  I thought something terrible had happened to her.  I went closer to observe her chest moving up and down.  She was breathing evenly,  faintly.  But she still did not react. Now I was right alongside her thin white body.  I could smell her dirty fur and the unique odor of the industrial park dust.

I could not resist the temptation to touch her,  even though it is dangerous to touch an unfamiliar dog who is sleeping and has just come from the streets,  where any touch can be a threat.  My hand was almost touching her fur …but stopped in the air when I saw her her lame front right leg ending abnormally at a massive open wound where her left leg should have been.  The wound was not very old.  The bleeding stopped probably after a constant licking,  which dogs often do when they have an open wound.  This is their only means of self-treatment,  and is surprisingly often successful in helping to disinfect wounds.

Shocked by the deep, ugly wound,   already thinking of the tremendous pain that Light suffered,  alone, frightened,  when her legs were mutilated,  I abruptly realized I was watched silently by a pair of gentle,  clear and bright eyes.  Light was not scared, not nervous,  and did not react violently to my close presence as a stranger near her tortured,  thin body.  I felt ashamed for a moment to belong to the same species that hurts deeply,  irreversibly,  so many animals around the globe.

I don’t even know when I started to cry.  Rain was falling,  but the drops rolling over my cheeks were not rain but tears,  because there was a roof above our heads.

Light stood up.  Only than I realized that one of her back legs was also missing.

Writing these lines, I am still shocked by this case.  I have seen lot of suffering in Romania,  many dogs abused,  tied on chains,  left starving in misery,  full of parasites,  puppies dehydrated,  limping,  fractured bones,  dogs with mange,  beaten dogs with open wounds…but something moved me differently about this tiny girl.

I can’t even imagine the amount of pain Light suffered,  losing two legs,  probably in snowplow accidents –– with nobody there to help her.

Amazingly,   Light is friendly and only a little possessive about her food,  when the other dogs from the same kennel get too close to it.  However,  this attitude is normal considering that she had to survive out there,  on the streets,  fighting with her pain and disability,  guarding from the other packs of  strays whatever food she could find.

All street dogs have as their immediate goal to remain alive until tomorrow.  For Light,  this was much more difficult.

Maybe I called this white princess Light because in a few days,  Romanians –– like all other Orthodox Christians –– celebrate Easter.  While we usually associate Christmas with gifts,  Easter is the celebration of soul (and mind) purification.  Choosing to describe Easter in a word,  I would pick up this word to be Light…a word that inspired me to give an identity to this dog who came to us without a name.

Partially too,  I named her Light also because of the pure inspiration that she and her sad,  painful story represent to some of us who search to find the power to start over,  raise our heads above a tragedy,  endure and keep going.

If Light story cannot move a human soul,  there is not much humanity left in it.  If you look right into those gorgeous eyes and pretend that nothing happened,  something is wrong!

In the last days,  we rescued in total three dogs who each needed to have one leg amputated.  These accidents in the industrial area have increased alarmingly.  They occur when dogs burrow into the snow too close to the roadside,  and are hit by snowplow blades.  Usually the drivers never even see them.

After being spayed and vaccinated,  Light will start a rehabilitation program under the supervision of our dedicated staff.  Next, within a few months,  we hope to report to you about her progress,  or maybe show you Light in her new forever home –– where she will never be forced to growl to defend her food,   and will never again suffer in silence as she did in a forgotten corner of Romania.

As a result of our supporters great contribution, Light is safe and happy. Again, we made possible the “impossible”….but the “battle” is not over…as there are many dogs alone, scared, suffering exactly like Light was.

Your donation makes possible our rescue work in Romania! 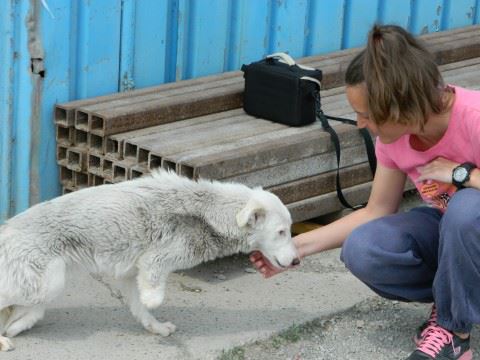 UPDATE2: Light was transferred to the Adoption Center 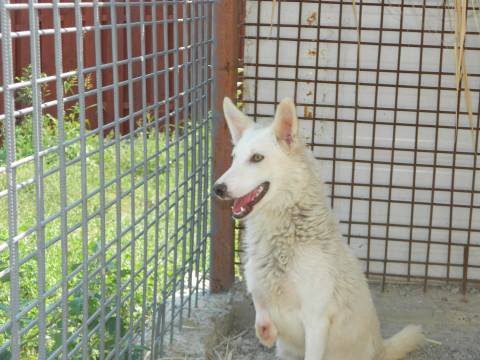 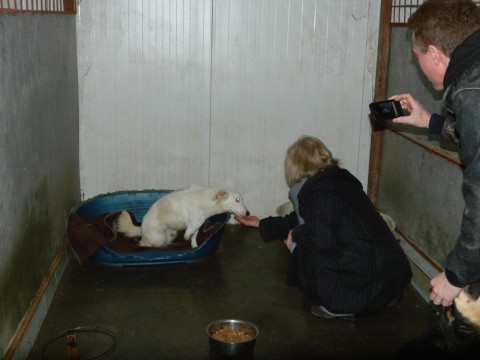 UPDATE 4: Gail from UK visited Light in February 2014 to meet her before she will finalize the adoption process.
UPDATE5: Light happy in UK, April 2014 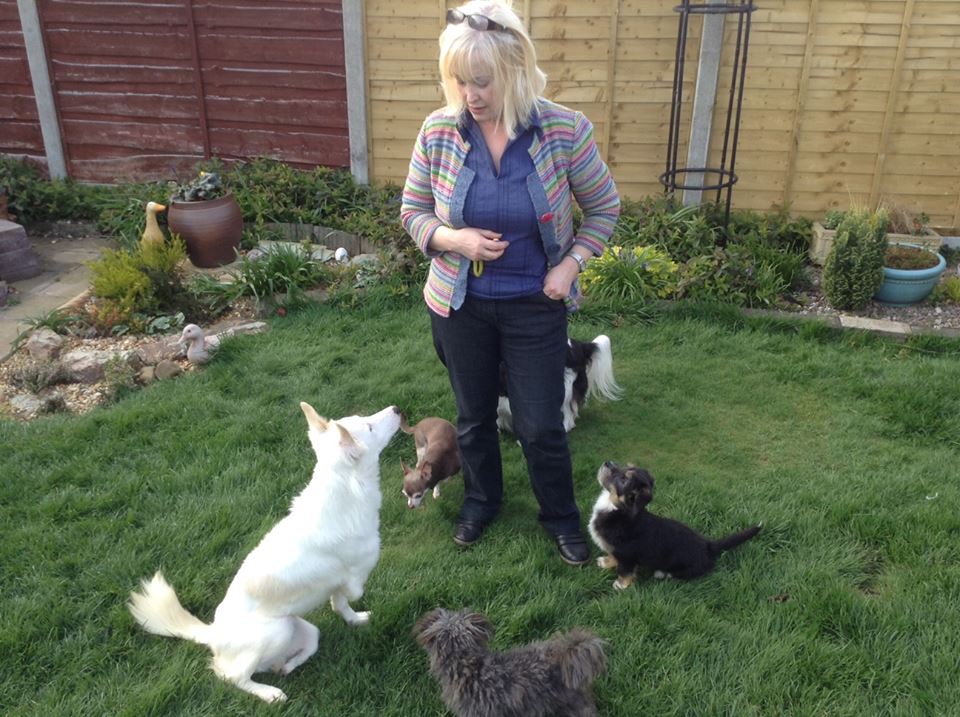