Give a concise definition of the word” hero”!

Everyone heard of a hero, some were lucky to meet one,face to face. We know about the heroes from the history books, about the heroes of our present time, we honor the veterans of the wars,  we even heard of the other heroes (not humans) – a dog who saved a man from drowning or another who saved a child from fire.

Would it be possible to define as a “hero” somebody that  forgives the humans, after being tortured and abused,  day after day, for years? It looks more like a Biblical “turning the other cheek”!

Would it be possible to name “hero” someone who suffer silently and has the power to respond with kindness, friendship and loyalty to brutal attacks, indifference and intolerance?

Born on the streets,  Pufulet was another stray wandering in search of some food to keep him alive.  After spending an extreme cold winter outside, his clever mind discovered a way to enter inside the block with apartments – he was jumping inside the block ‘hall in the evening, when it was getting dark and somebody was coming home late…and he was returning on the street, early in the morning, when the door was opening again by the first person leaving to work.

And that was Pufulet’ biggest sin!

Some people hate the presence of “man best friend” inside the hall. Initially, people voiced excuses: his fur smells or he has ticks and fleas.

A very important note must be added now: Pufulet is a small size dog, not “dangerous”, not noisy (he doesn’t bark to disturb, not even growl). He is kind, gentle, searching for attention or begging for hugs (sometimes more then for food)

Exactly like people, some dogs born lucky and some doesn’t. There isn’t a statistic of all dogs being killed (or crippled) by cars in Romania in a year, or dogs “mysteriously” dying in the public shelters. We can only estimate that there are 4 zero’s numbers, probably close to 5 zero’s numbers. These are the unlucky dogs!

During the cold nights, every time when Pufulet struggled to get inside the block, a number of people were fighting against this. Facing this tiny dog’ kindness and purity, they responded with hate, force, violence.

A year ago, Pufulet was burn with acid, a portion of his back skin was severely damaged. It took 3 months to recover. But he survived.

Pufulet’ haters beaten him numerous times, but for unknown reasons, Pufulet always returned “home” after his wounds healed, after the pain gone away, after his scars and bruises disappear.

Two months ago, Pufulet was beaten so badly , he almost got killed. A big hole in his head, a broken leg and few broken ribs were the first conclusions after the veterinary’ examination.

Pufulet was hospitalized for several days for the intensive medical care. Bandaged all over, he looked like a veteran surviving a war, but he “simply” survived the nightmare of being a homeless dog- the same nightmare to which many Romanian dogs are exposed.

2,5 million dogs roughly are living presently across Romania. This incredible number transform Romania into the country with the worst severe homeless animals problem from all the other south-east European countries.

For the first time in his life, when looking up, Pufulet didn’t saw a hand or a booth ready to hit him hard. He didn’t had to struggle for the  nice warmth his body felt. And the food…was delivered in a big bowl, only for him.

Pufulet woke up in the intensive care room at the vet, when a gently hand touched his face. He shuddered and wanted to move away, to run maybe, but he couldn’t because of the pain he felt all over his body, in chest and leg especially. The only thing he could do was to stop his little wet nose in the air and sniff:  Pufulet smelt a human. A different smell. A different human that he never should be afraid of, ever again.

Pufulet recovery went well and he is now 100% a normal dog.

He never felt anger or hate against the people. He never choose “the easiest way” to growl or bite to defend himself. Was it the day when he was beaten badly and almost killed, his luckiest day? That was the day when we saved him.

Pufulet live now with Sabine from Germany and has a furry friend, also rescued from a shelter.

At the beginning of this article, you were asked for a short definition of “hero”. And this dog story is not meant to influence your answer. 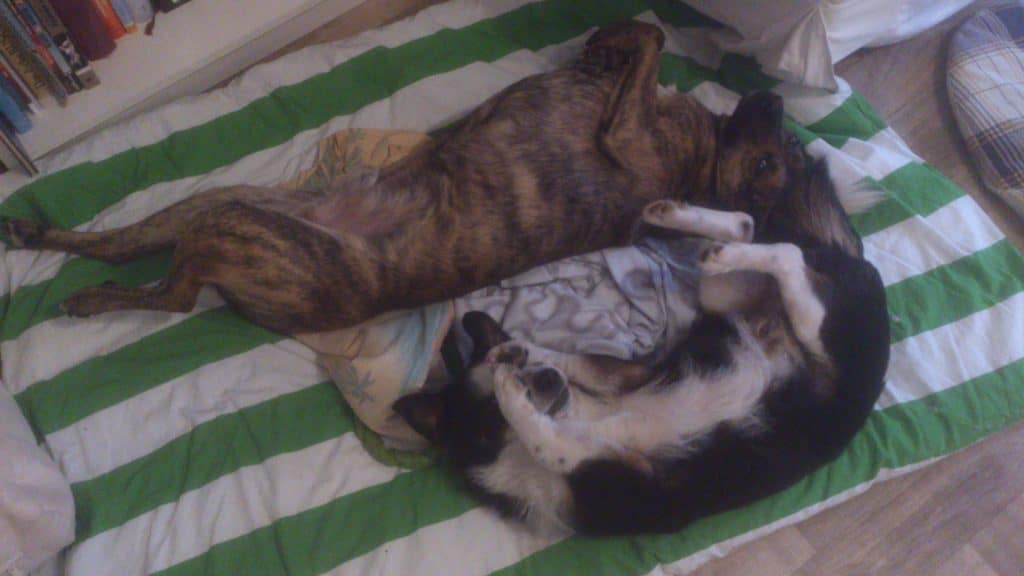