Homer’s story is tough to tell but it is one that inspires us all with hope and vision. He was found at the edge of the road, in the burning sun. He could barely move. Running away was not an option as he could hardly stand. Crawling was all he could manage, and he was doing his best.
Homer distinguished himself immediately in such a strange way. I had never seen more fleas on a dog! His fur was so dirty, his skin so red and itchy. The insects had a field day roaming over every inch of his tiny, weak body. Life on the street had transformed Homer’s life into a living nightmare. But a nightmare that we were determined to put an end to. 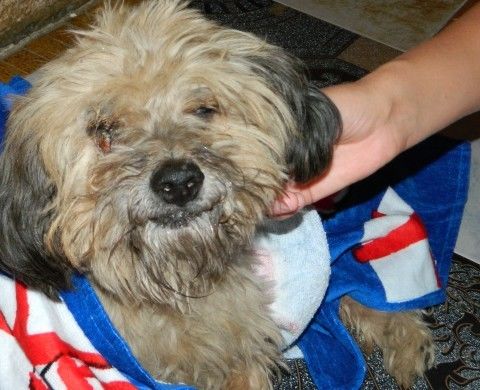 The first bath was a relief for Homer, no more bugs and dirt! Being clean was the first step. We tried to give him food, but he wasn’t ready. We put fresh water in a bowl but he wouldn’t drink. I took some water in my hand, and offered it to him. He came closer, hesitated, and then took a sip, directly from my hand. I realized that he didn’t knew how to drink water from a bowl. As with so many homeless animals, he had to scour the streets for sustenance. He had never been offered anything. What little food or water he had was found, or fought over.

After drinking a little more water, Homer slept. For almost 2 days he slept. We worried that he might never wake up. But he did. He is a survivor. He still crawled, but he could cover short distances. He picked at soft food, and came to my hand to drink water.

Homer’s sight wasn’t too good. Neither were his teeth. His legs? Not good at all. Just as bad as the rest of his neglected little body. He was aged beyond his years. But his spirit sought to soar. Every day he grew stronger, brighter, and braver. 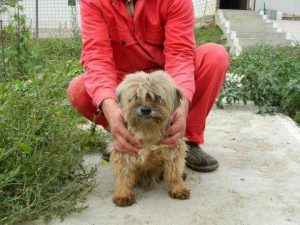 Click to see a video of Homer at ROLDA shelter

After a couple of months, with some good food, love and care he looked totally different. Rescued Homer had been transformed into a different dog. And with the help of ROLDA he has been made whole again. The little life who was once someone’s trash, has been transformed into a wonderful companion animal who now lives with his family in Switzerland. Life is full of surprises. Some good, some not so good. Homer showed us not to give up. And ROLDA will not.

Believe in your own strength, and learn to to live with forgiveness and a smile! Here is Homer now, living in Switzerland. Thanks to ROLDA’s supporters, he need never live in fear and filth again.

For Homer, this may seem like a miracle. It’s not. This is result of the work, time, money and the caring of ROLDA and our supporters from around the world. Homer was a dying dog, but he refused to give up. He was given the chance to gain back the strength so he could fight for his life.

Who give him this chance? You and all the ROLDA supporters that read stories like Homer’s and support our rescue work in Romania. Without your donations, Homer would have been left like garbage at the side of the road to die under a burning sun. Thanks to you, he is now being spoiled by a loving family in Switzerland!

How did he end up in Switzerland? My friend Lolita and her friends from Oasis des Veterans agreed to help some senior dogs to be transferred to a Swiss sanctuary where they will be looked after for the rest of their lives. Oasis is a sanctuary, but more like dog paradise! The dogs are free to roam around, inside and out in the garden. The volunteers of Oasis des Veterans work with dedication and passion to make these dogs as comfortable as possible.

After working for so many years with these dogs, ROLDA has seen some amazing recoveries, and some personal discoveries too. The generous and compassionate people who find room in their lives for a Romanian street dog gain from the experience. Knowing that you can make such an incredible difference to dogs in desperate need reaffirms what we know deep inside. We can make a difference. We DO make a difference. And we are the better for it

Read this message from Homer’s new family to see how fabulous it feels to save a dog’s life, and make them a part of yours. 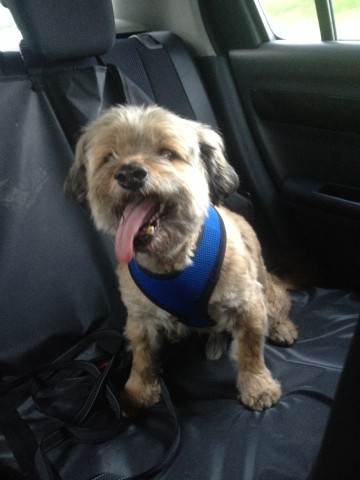 “We are the family who adopted Homer. I wanted to thank you for what you’re doing. It’s just amazing, I’m like you, I want to save them all but I started with one and it’s Homer. Homer is amazing, he’s still a little shy, but I know in a few weeks he will open up to us completely. He’s so amazing on the leash, very funny, he started to play with us like he’s 1 year old again, he’ s always demanding to be pet! Which is super cute! Anyway, I thought it was fair that you knew that Homer was okay now, that he finally has HIS home, that he’s loved and enjoying his new life! It wouldn’t have been possible without you and the other people of ROLDA, so thank you a million for what you do every day! Thank you for saving Homer and all the others! …Take care Dana, Yelena” 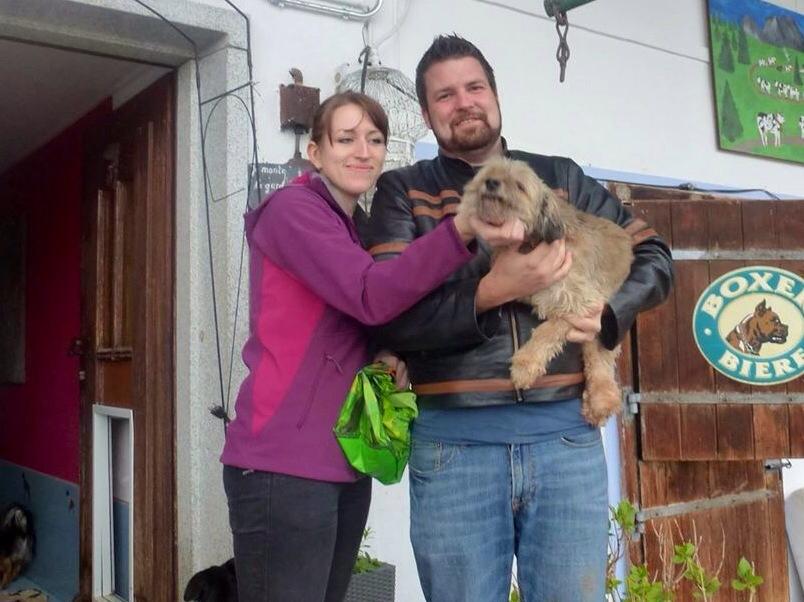 We Still Need Your Help. Your Donations Allow Us to Save Hundreds of Other Homers Out on the Streets

Your help made possible for us to give Homer a new life. We saved a four-legged soul and put him into a safe place. Homer is the same fighter that he was when we found him, but also a changed dog. It is a change for the better. He always has a smile on his face and is grateful for your attention, no matter if you are about to give him a bath, a grooming, or just a belly rub! His smile is his way of saying thank you for your help!

Homer is alive and smiling because of you!

There are about 50 other seniors from a total of 750 dogs in our care who need a special food (sometimes canned food) that they are able to digest. Summer days are on their way back. Our rescue dogs will be needing spot treatments against fleas and ticks. Help us keep these dogs off the streets and in good shape. A little bit of money can go such a long way to help an animal on the street!

Your donation of just 7 EUR will help protect a dog against fleas and ticks with medication.

Please donate as much as you can afford for our senior dogs special food.

Please know how much we appreciate the support that you give us! We could not do the work we do without you. You are part of the ROLDA team that takes these dogs off the street, away from abuse, and finds them safe, loving families. They may finally live out their lives in peace after so many years of suffering and struggle. Thank you!

Your gift made to ROLDA has the power to solve some of the Romanian’s thorniest community problems. Your gift says “Yes!” when so many others would say, “No, it’s impossible.”